Enjoy choral clinics with the special guest artist and UIC faculty. Sing with over one-hundred high school students from the Chicagoland area and learn about college level choral programs from the UIC Choirs. The festival concludes with a concert with the UIC Choirs.

If you, your choir, or individual singers from your school would like to participate in the daytime festival, please email Liza Calisesi Maidens, Director of Choral Activities at: liza@uic.edu.

About our Guest Artist:

Mr. Dunn has had the privilege of working with gospel greats such as Tremaine Hawkins, Myron Butler, Melonie Daniels, Troy Bright, Lamar Campbell, Damien Sneed, Walt Whitman and the Soul Children of Chicago, Smokie Norful, Jonathan Nelson, and many more. He was awarded Album Producer of the Year for AME Live featuring the AME International Mass Choir from the Rhythm of Gospel Awards. He has served on music staff for the AME General Conference in Philadelphia (2016) and in Nashville (2012). He opened the 2014 Thomas Dorsey National Convention of Choirs and Choruses for the AME Mass Choir. He is the album producer for the 2015 release AME 200: Celebrating 200 years of the AME church.

Mr. Dunn is a MacArthur grant recipient for his original work Hopera: A Hip Hop Opera.  He was nominated for Best Music Director from the Black Theater Alliance Awards for his work Hopera: a Hip Hop Opera. He has opened for international Hip Hop Recording Artist The Roots at Indiana University. He was a featured artist and vocal coach for the live DVD recording of the Higher Ground Gospel Choir in Helsinki, Finland. He has toured throughout the US, South Africa, Italy, Germany, the UK, and Scandinavia. He is the former Artistic Director of the Legacy Black Music Project at Roosevelt University. 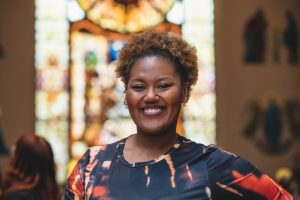 Coty Raven Morris, founder of Being Human Together, authored a children’s book, “What Do You Want to Be.” Together, with Connor Koppin, we conceived of the idea to write, illustrate, compose, and perform Coty’s original poem in the form of a children’s book. The choral commission, “When I Grow Up,” asks us about who we are, who we wish to become, and what can we do NOW? As a collective, the UIC Choirs and guest high school choirs will perform and record the commission at the end of the invitational.