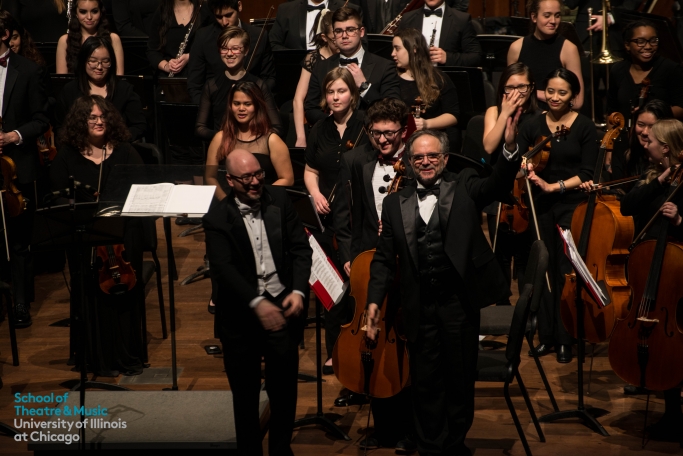 Entering his third year as the Head of Music Studies at UIC School of Theatre & Music, Dr. Louis Bergonzi is excited to prepare students to work with a diverse body of music for orchestra and to expand students’ understanding of all there is to know about music. In this interview, Guillermo Duarte, UIC Music Programs Manager, talks with Dr. Bergonzi on working with grade school musicians in Chicago, UIC’s influence on Chicago’s musical landscape, and UIC Orchestra’s March 2019 concert Orchestral Sounds of America.

GD: What is the difference in how students approach classical music in Chicago versus other places you have taught?

LB: The opportunities and rewards of playing in a symphonic orchestra are derived from the classical music of Europe, given that the orchestra is a “folk ensemble” within that tradition. Most students who play in any campus orchestra are experienced and have some background in classical music. This is the case for the students who play in the University of Illinois at Chicago Orchestra (UICO), for the most part. But in a campus population that is as diverse (including musically so) as UIC’s there are implications related to our campus audience, meaning that for an increasing number of UIC student audience members the symphonic orchestra – its values, music pieces, and traditions – may feel exotic. In my role as Head of Music Studies, the faculty and I have been able to have conversations about how the music program here might better represent the musical diversity and communities of Chicago in a way that makes us an invaluable part of the higher education landscape in our city and beyond.

GD: You have worked and have taught in clinics with grade schools and youth who are often beginner musicians. How do you broaden their idea of classical music?

LB: Actually, with younger students I’m not out to do that. I want them to play a stringed instrument for the value it adds to their life, including using whatever repertoire matters to them. The good news is that stringed instruments are used in a variety of musical practices and allow for participation in many communities. For example, a violin can play Western classical music and be used to participate in a fiddle community. Beyond that you find stringed instruments used in so much of rock and other commercial musics. Just watch SNL.

So, with younger students it’s not about teaching them to be only in orchestra. It’s to teach them to play in many kinds of groups, from orchestra, string quartet, and fiddle band, to a mariachi. Speaking of which, I want everyone to know about UIC’s own Mariachi Fuego and for interested students and faculty to contact us about it and our many other ensembles open to students across campus.

GD: What’s the main piece of advice that you give to orchestral musicians?

LB: To learn how to make their own careers. Orchestral musicians must be open-minded and curious so that they are versatile, musically and intellectually, and have deep experience in at least two different musics. They should be able to function in assorted professional roles beyond being strictly a performer who walks out and “bestows” to others. This means they need to know how to conceive of, organize, market, and present a music event, and it also requires knowing how to interact with an audience. At UIC, where (as they say) “Chicago is our campus,” our students can witness lots of examples of all this.

For the students in the UICO, I spend time each year working on accurate renditions of pieces from different eras of the Western classical tradition, contrasting how it looks (notation) with how it goes (stylistically appropriate rendering). I also make an effort to include pieces that are written by living composers, are jazz-inspired or from musical theater. The last is important because chances are good that in Chicagoland, students will get a gig playing in a pit orchestra. These aspects of orchestral training historically haven’t been a thoughtful part of an orchestral curriculum and still probably aren’t in larger schools of music across the country.

GD: How are UIC Music students influence to the broader music landscape?

LB: Our students do interact with the broader music landscape. Two examples: students in the jazz program leave here having had experience in the jazz scene in Chicago. This is made possible by our renowned faculty in the jazz studies program who are some of the most respected and engaged jazz musicians in the city. Similarly, a UIC music business degree student completes extensive internships in the music industry not only here in Chicago but in other music centers in the US.

Also, UIC students and potential students influence what we do at UIC. We pay attention to what students bring to us. To its credit, the UIC music faculty recognized just this past year the need for us to grow with the kinds of musical backgrounds being brought to us.

We noticed that many of our students and applicants had skill, love, and experience in exactly the type of commercial music with which they would eventually work as music business professionals. We accepted that this is not the music at the center of schools of music like ours across the United States, namely Western classical. These applicants and students demonstrate their musicianship by creating their own music digitally, especially by producing within the hip-hop world. The faculty decided to value the digital musicians’ expertise in laptop/music technology and set up an option for applied study with our BA degree programs. Starting this fall, our digital students will not only learn the underlying theory and history of Western music as do all students, they also will develop their creativity by working with a member of our faculty with the appropriate expertise, as determined or provided by our composition composer, Professor Marc Mellits.

GD: In extending and teaching our students the broad disciplines and styles of music, the School of Theatre and Music Concert Series last spring offered music of a wonderful array from the energizing John Cage, jazz anthems of Miles Davis, and even some disco tunes with Peaches and Herb. In your case, UIC Orchestra’s concert with Whitney M. Young Chamber Strings at Logan Center for the Arts not only had a wonderful repertoire but also a lasting message of unity and respect. What inspired this concert?

LB: First, I hope in the near future to invite groups like those from Whitney M. Young Magnet High School to UIC’s own concert hall in our new Center for the Arts instead of renting performance space at another institution.

But to get to your question, the political and national discourse around immigration has tended to consider immigrants as other people, instead of us, as in “We, the people.” The development of symphonic orchestras in the United States is not often conceived of as dependent on immigration. The US orchestral enterprise (school, community-amateur, and professional orchestras) wouldn’t be what it is were it not for immigrants’ bringing their music and talents here.

So, in preparing our March program, Michael Mascari, the orchestra director of the Whitney Young Orchestra and I were trying to show that immigrant composers and performers have provided invaluable repertoire and sensibilities to what became the American orchestral scene. Our point was that building walls, blocking visas, and silencing voices weaken American culture, including music written for symphony orchestra. Without immigration our culture is robbed of dimensionality, excellence, and humanistic potentials. The musical impulses brought to the US by newcomers have only been generative, while worldviews and efforts constructed to limit this country’s culture to things historically “American” are not only misguided, but destructive.

GD: Were students familiar with the repertoire or the composers?

I think most of the pieces were unfamiliar to UIC and Whitney Young students. But some pieces, like Aaron Copeland’s “Rodeo” from Hoedown, are orchestral standards that they’ve at least heard as part of TV commercials. Some students may have known that Copeland’s parents immigrated from Lithuania, that he was among a large number of Jewish exiles from Europe who were composers, or that he is referred as the Dean of American Music. But I doubt any knew that Copland was the target of the US government during the 1950s as part of what is known as the lavender scare because of his homosexuality and Leftist leanings. There is such irony in that. We also discussed with them that one of his most famous American pieces – Lincoln Portrait for orchestra and narrator (reading with the words of Abraham Lincoln) – was withdrawn from Eisenhower’s inaugural celebrations because of institutional, in this case governmental, homophobia. I suspect we were able to twist students’ previous understanding of this particular piece by recalibrating its story.

Other composers on that program included Erich Korngold, a German Jew who came to the United States in 1934 and left an undeniable mark on film music, and Denes Agay, who left Europe seeking safety from Nazi persecution of the Jews and ended up in New York. The pieces we performed are just a few examples of how American classical music wouldn’t be the same if it weren’t for the influence of individuals who came to America seeking a better life.

GD: What impact do you hope this concert left on your students and the audience?

LB: It was particularly important for an institution like UIC to do this type of work, to commit to this message about its community. This idea that an orchestra and its audience should reflect their shared community is part of a larger trend, I think.

Orchestras from across the United States seem to have come to the realization that they must relate to communities more broadly conceived and that they are to serve those communities rather than just being served by them or funded by some members thereof. Whether this reorientation is a result of financial realities is less interesting to me than the implications of the view of the nature of the orchestra as a community-serving organization. Now, I may overzealous about this, but to my hope, I just read a speech yesterday called “Strengthening Ties to Their Communities,” given to the American Symphony Orchestra League (think the NBA for symphonic orchestras) by Ann Meier Baker, Director of Music & Opera at the National Endowment for the Arts, in which she said:

Instead of the orchestra being intentionally separated by the community like it was when I was a kid, new audience members are surrounded by multiple efforts to connect and serve the broader Cincinnati community. For me this transformation of my hometown orchestra is a metaphor for the changes I perceive happening around this country, and there are examples to be found in many of the orchestra projects funded by the NEA.

GD: Thank you Dr. Bergonzi. I am excited to continue to follow the wonderful work you are contributing to UIC and Chicago. Before we go, I have one final question: What are you currently listening to?

LB: Right now, I am listening to soundtracks from the musical theatre works my husband and I will be seeing in New York next week. In particular, I’m enjoying The Prom and the new rethinking of Oklahoma!