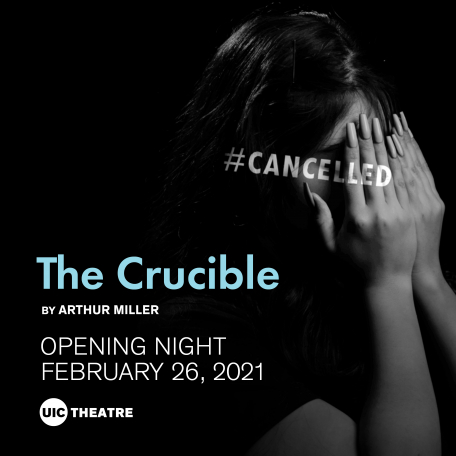 The Crucible
by Arthur Miller
Directed by Tasia Jones
March 5 – March 14, 2021 (DATE CHANGE - Origninally Feb 26 Open)
ONLINE PLAY
Free Ticket here: http://uicstm.co/crucible
When teenage girls are discovered trying to conjure spirits, the 17th century town of Salem explodes with accusations of witchcraft. The vicious trials that follow expose a community paralyzed by fear, religious extremism and greed.
"The Crucible was an act of desperation...when I began to think of writing about the hunt for Reds in America, I was motivated in some great part by the paralysis that had set it... Nobody but a fanatic, it seemed, could really say all that he believed." -Arthur Miller.
Sadly, we live in a polarized world of fake news and cancel culture so the play is still achingly relevant today as it was in 50’s during the McCarthy years when peoples’ livelihoods were being cancelled.
Click the following link for the free event ticket and event registration: http://uicstm.co/crucible
Post-Show Panel Discussion
Join us for a free post-show panel discussion hosted by UIC Theatre faculty member Richard Corley with writers, artists and special guest Aaron Krall.

About our Special Guest:
Aaron Krall teaches and writes about first-year writing, basic writing, drama, theatre, performance, and the city. He recently published “Building the Entertainment Machine: Charles L. Mee’s Time to Burn and the Performance ofPostindustrial Decay in Chicago” in Theatre Survey, he is revising an essay titled “Theatrical Geographies of Segregation: Spatial Displacement in Theodore Ward’s Big White Fog” for an edited collection, and he contributed to the Shakespeare 400 Chicago City Desk Blog. Krall also writes about issues in composition and rhetoric. He is currently revising a manuscript titled “Disrupting Remediation: Neoliberalism, the Completion Agenda, and First-Year Writing,” and he regularly presents his research at the Conference on College Composition and Communication, the Thomas R. Watson Conference on Rhetoric and Composition, and other national conferences.